The first Dojo for Change was held on Sunday, December 22.

During the event, it was packed and warm, despite the chilly night. Because they were intrigued by the key phrase “My Own Work,” members of all ages and positions gathered. Everyone broke into small groups, but they were so lively that they did not have time to finish introductions. With Mr. Sakurai facilitating discussion, Mr. Nakano and Mr. Nishimura each spoke on various topics, from how they first met to thoughts and stories about their “Work”. 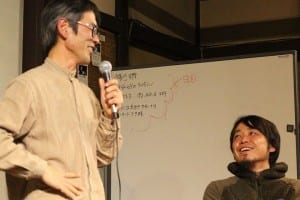 Mr. Nishimura expressed that he was not thinking “Let’s change society.” Anyone should be able to create a more concrete sense of fulfillment at work. Instead of for oneself, shouldn’t people think about how they affect others and their implications for society? Mr. Nishimura eloquently explained that when you experience other people’s “Work,” even if it is small, people will positively support you. 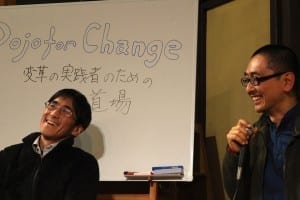 In the middle of the guest talk, participants broke into small groups and shared their thoughts and experiences. Conversations varied from group to group, and these conversations became a chance for participants to learn from each other. Although Mr. Nakano and Mr. Nishimura are referred to as pioneers, the voices of many participants who sympathized with their train of thought were also heard.